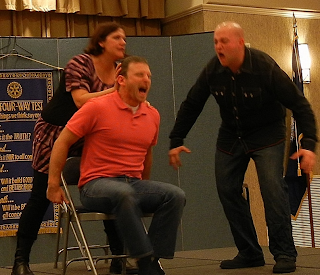 Nov 26, 2013:  The Historic Rotary Club of Charleston was treated to a lunchtime treat of exceptional improvisational comedy, courtesy of the renowned “Have Nots” of Theater 99.
The ingenius improv team was led by Brandy Sullivan, a founder of The Have Nots! Comedy Improv Company (1995) and Theatre 99 (2000). She has performed in over 1400 improv shows in 26 states and she is a Co-Producer of Piccolo Fringe and The Charleston Comedy Festival. She was joined by Andy Livengood, John Brennan, Larry Perewiznyk and Jennifer Buddin, who all had the crowd in stitches.

The final act featured an interview with our club’s own Hilton Smith, which quickly fed the troupe’s improve machine with material from killer tennis to troubles with dog waste. You were a great sport Hilton! 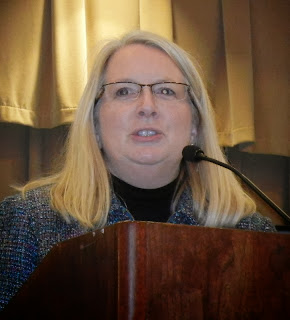 Nov 19, 2013:   Kathryn Basha has been a senior planner with the BCD COUNCIL OF GOVERNMENTS since 1997. A graduate of Virginia Tech and the University of Virginia, she has degrees in historic preservation and land use planning.  Prior to her arrival in the Charleston area she did planning and development work in the state of Virginia.

BCDCOG is one of ten regional councils in South Carolina and encompasses all of the towns, cities and communities that make up Berkeley, Charleston and Dorchester Counties.  Its mission is to support member governments in efforts to preserve and enhance the quality of life for the citizens of the BCD Region. It is made up of 56 members representing every part of the BCD area.  Its objective is to prepare plans, to provide technical assistance to local governments and promote coordination and cooperation among public programs in the Region.

Services of BCD include Grants Administration, Community and Economic development assistance, Revolving Loan Fund Program, Transportation and Land use Planning, GIS projects, Water quality management and Workforce development. Households in the region are expected to increase by 88,000 by the year 2040. This increase will affect the port, the airport and the expansion of Boeing and will affect costs, transportation, quality of life and affordability to live in the region. Thus the Region has a five point vision:
1)Planning future transportation options
2)A vital economy with good jobs, schools, healthcare, and affordable housing
3)A protected environment with clean air and water
4)Diverse low country communities
5)Cooperative caring atmosphere at the intergovernmental level

Trends are being studied to determine where growth will be and where the open spaces and corridors will be located. Computer models include the number of miles a typical person drives in a day, how many road miles are driven and where the points of congestion are located. New town centers must be planned for as well as transportation corridors. Also important is the preservation of open spaces for recreation purposes.

By 2035 the population of the BCD Region is expected to reach 900,000.  The future of I-526 is still not clear,  but it does seem likely that the Glenn McConnell Parkway will be extended. 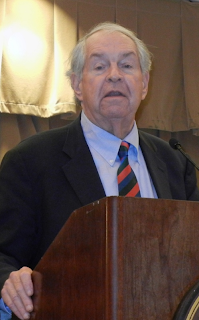 Judge Sanders has been a lawyer, appellate court judge, and president of the College of Charleston.  He is also one of the founders of the Charleston School of Law where he currently serves as Chairman Emeritus. He has taught law at the Harvard Law School and the University of South Carolina School of Law.

Sanders began his remarks by saying he was not going to talk about law and education.  “I am sick of all that.  I am going to talk baseball.”

Sanders’ grandfather was a Confederate soldier and he uses his grandfather’s shotgun every dove season.

The Civil War, in which his grandfather fought, involved baseball.  Right in the middle of the war, the largest crowd ever to attend a sporting event at that time, 41,000 people, gathered together on a remote island off of the coast of South Carolina.  The date:  December 25, 1862.  The location:  Hilton Head Island, where Union forces kept Confederate prisoners.  Escape from the island was virtually impossible. This baseball game was truly “an extraordinary event,” chronicled by military records.

Before the Civil War, baseball was played primarily in the North and “the game was reserved for gentlemen,” Sanders said.  However, during the war, officers and enlisted men played side by side.  Almost every soldier, Union and Confederate, learned to play baseball during the Civil War, “thus, linking baseball with patriotism.”  The popularity of baseball quickly spread throughout the South.

Judge Sanders discussed an old acquaintance of his, “Shoeless Joe Jackson,” whose records in baseball surpassed players of his day as well as today.  After 1921, Shoeless Joe Jackson was stripped of all of his records.  He traveled the country playing “outlaw” ball under an assumed name before returning to his hometown of Greenville, South Carolina after all efforts at reinstatement were denied.

Sanders concluded his remarks by saying, “It has been 150 years since Americans went to war with one another yet Americans are still struggling to understand one another.  However, we have one single thing in common and that is baseball – all across the South – in every state that was a part of the Confederacy.”

Submitted by Molly Blatt
Posted by Carroll at 1:27 PM 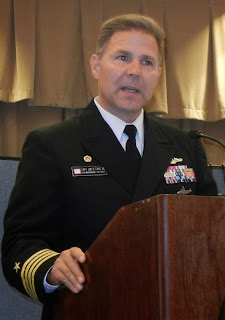 Nov 5, 2013:  In the second installment of our Military Series, Captain Jay Fahs provided a wonderful overview of the Naval Nuclear Power Training Command in Charleston. Captain Fahs graduated with honors from Duke University before obtaining a master’s degree from the University of Colorado. He has served as executive officer on a number of ships and has been recognized with many awards for his performance. Prior to becoming the commanding officer at the NNPTC, Captain Fahs served as officer in charge of the Nuclear Propulsion Examining Board at the US Fleet Forces Staff Command in Norfolk, VA.

Captain Fahs explained that the Navy has utilized nuclear power since 1955, and it now fuels 44% of the combatant fleet . This technology provides 75% of the US’ warhead capacity, but only uses 35% of its budget.  Nuclear powered submarines can run over 30 years (about a vessel’s useful life) without the need for re-fueling.  This provides our armed forces the extraordinary flexibility to maintain a presence anywhere in the world. In fact, with water treatment and oxygen generators on-board, often the only reason a submarine must return to port is to procure more food. Naval subs can even travel beneath arctic ice. With the capabilities nuclear power provides, our fleets are able to position themselves to leverage nuclear fire-power, take out an enemy’s land to air defenses ahead of an airstrike and eavesdrop on regions of interest. These abilities are critical to the US military’s ability to protect our country’s interests around the globe.

The NNPTC mission is to qualify naval officers and enlisted personnel in the operation, maintenance, and supervision of naval nuclear propulsion plants in support of Fleet operations. It is the largest command in Charleston with 3,000 students and 500 staff.  This unit’s numbers will increase under an emerging program structure in which more graduates return to Charleston for further training. Only the top 10-15% of those entering the navy qualify to enter the nuclear training program. Applicants will need more than just intelligence and aptitude. The nature of the mission demands only those exhibiting the highest levels of character and integrity are accepted. Students can earn 2 years or more college credit depending on their status and previous education.
executive officer on a number of ships and has been recognized with many awards for his performance. Prior to becoming the commanding officer at the NNPTC, Captain Fahs served as officer in charge of the Nuclear Propulsion Examining Board at the US Fleet Forces Staff Command in Norfolk, VA.

The NNPTC runs a $3.1 million annual budget creating a net income of over $170 million for staff and students.  Its overall impact on our local economy is much greater. In fact, the navy is only second in overall economic  impact to the Port of Charleston. The NNPTC awards nearly $1 million in contracts on site..

Submitted by Will Thames, Keyway Committee
Posted by Carroll at 12:19 PM